What Women Can Do When Gas-lighted By Men

The second presidential debate shed light on the issue of how women are treated sexually by men. When it comes to their questionable sexual behavior, some male politicians become sex educators. They teach lessons on “locker room talk” or variations on what the meaning of the word “is” is.

Concern over the abuse of power by men toward women, whether in politics, business, or any social arena begs serious attention. Yet when we hear leaders “gaslight” their behavior what message does it send to women? How does it influence the sexual attitudes of young boys toward girls?

The term “gas-lighting” comes from the 1938 play Gaslight. The main plot focuses on a husband’s methodical attempt to convince his wife and others she is insane. He does this by manipulating her to question her perception of events. One way he accomplishes his goal is to secretly dim the gaslight in the room. When she comments that the room is getting darker, he tells her that the light intensity has not changed-“It’s just your imagination.”

The objectification of women by men ignores their equality. It dims the light on their right to be treated respectfully. “Boys will be boys” gaslights women’s reactions to inappropriate talk or touching. Tell me, is this fair treatment? What if the tables were turned guys and someone exploited you sexually?

Here are three actions a woman can take when being gaslighted by a man.

Turn the light up on his behavior

Do not allow his version of the facts of his behavior to become your version. Hold your position. Use your firm voice and tell him that his actions are inappropriate and will not be tolerated. Hold him accountable for his behavior.

Set a firm boundary with him

Gas lighting men are not safe! If your guy is pushing your boundaries, ignoring your “no” and trying to manipulate you to go along, drop him. End the relationship. He will make you feel guilty for every problem he brings in your life. Gas lighting men do not deserve you.

Only choose men who meet your standards

You deserve a man who is attracted to your heart, who admires your intelligence, and treats you with respect. A guy who is not intimidated by your power and encourages the expression of your voice.  Keep your gaslight burning brightly.  If he respects you he will not mess with the dimmer.

Finally, a message to men

Open your ears and listen guys. Women deserve nothing short of our respect. Period. Remember this the next time you encounter a woman. Think before you speak. Keep your hands to yourself–unless they are used to open her door. Let women observe you being a “gentleman”. 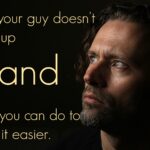 Why Your Guy Struggles With CommunicationCommunication, Connecting, Men's Issues, Podcast