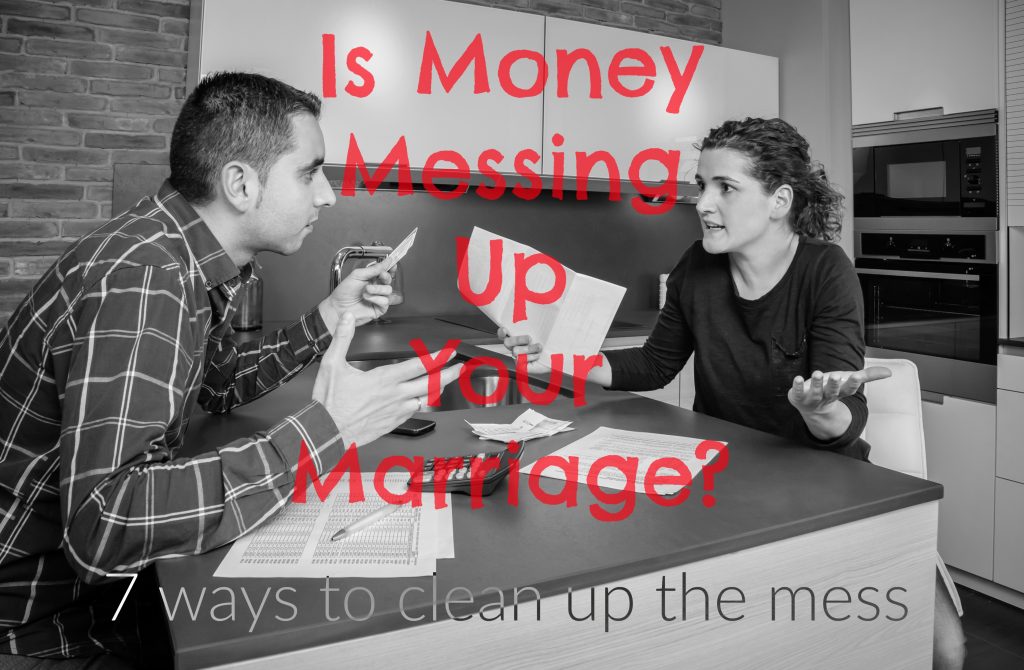 7 Ways to Keep Money From Messing Up Your Marriage

It’s income tax season. Stressful time for many households. It often sparks arguments over money. If only money was not a problem in marriage.

Is the solution to your financial challenges simply more money? Or how you deal with it as a couple? Many assume more money means less stress and fewer arguments. If only it were that simple.

Statistics on people who win the lotto:

Statistics on American debt in 2016:

How Money Can Mess Up Your Marriage

Money is not good or bad. It is neutral. Our relationship with money can make your marriage work well or it can mess it up !

Consider what the Bible has to say about the topic of money:

Having a family is a significant financial investment.

How couples communicate about money will determine if it’s manageable or a mess. Let’s look at 3 pitfalls to avoid that can mess up your marriage.

The problem may lay with one or both spouses. Some families spend more than they earn – living beyond their means. Before long, high balances are reached on one or multiple credit cards.

Couples who lack of rules about spending  or no clearly defined budget are at risk for problems. Not just financially, but also in the relationship. Arguments erupt over spending habits, large purchases that were not discussed, or late notices.

Before long, retirement plans are in jeopardy, as couples are forced to dip into IRAs.

Some couples assume they will meet financial expectations eventually. This is referred to as “magical thinking” getting results without a plan, according to Forbes.

Some marriages are wrecked when one partner is lying to the other about their handling of  finances. Lies may include income, spending, credit card debt. Individuals with spending or gambling addictions can rack up enormous debt under the radar.

Intentional non-disclosure of debts, risk investment loss, or other activity that threatens the financial security of the family is a form of betrayal that damages trust in marriage.

Here are a few of the problems that occur when couples do not have a unified approach to money matters.

Potential risks of not dealing with the mess

7 Things you can do to get out of the mess

#1: It starts with good communication

If you’re starting out, begin an ongoing conversation about your values, attitudes, and habits around money. The goal is to understand each other and come to compromise.

If you are in the pit you have to stop arguing or pointing fingers. Agree you have to come together and mutually work at finding and following a plan.

I dig deeper on how to communicate about money in the All About We Podcast. Click the play button above.

#2: Agree to not spend more than you earn during an average pay period Develop the skill of saying “no” to yourself if it falls out of the parameters of what you agreed together to spend. #3: If necessary, meet with a financial planner to establish a budget If you cannot figure it out together or if you’re in a an endless cycle of conflict you need a third party to help. Don’t put it off. You will feel much better when you have a collaborated plan! #4: Deal with your demons If you have an addiction to gambling or spending get some help. Don’t fool yourself into thinking you can stop on your own. If you lied or betrayed your spouse, own it and repair it. #5: Make allowances for allowances Couples work hard to earn income and provide for a family. As I said earlier, kids are expensive! Be that as it may, I recommend you make allowances for each of you to have an allowance on spending. This is non-discretionary money you can spend on yourself. Amounts should be discussed and based on your budget. #6: Create a line item budget for marital investment Notice I underscored investment. Your marriage needs time for enrichment. Allocate money for dates, activities, and occasional getaways. #7: Think microscope (hear and now) and telescope (long-term future) Years ago I worked with a couple who had some challenges in their views about money management. She was always worried about the current budget. He worried about the future. I said you have a microscope and telescope view. They agree both were important and needed equal “viewing”. I like their approach.

Is money making a mess out of your marriage? What steps are you willing to take?
Menu