How to argue less and love more

I enjoy watching movies. Recently my wife and I watched the 1951  classic, “A Streetcar Named Desire”. It was an edgy film, involving triangulated relationships. It’s not your typical love story. The couple could definitely use some lessons on how to argue less and love more!

Speaking of arguing couples, have you seen the 1989 comedy movie, “The War of the Roses” with Michael Douglass and Kathleen Turner? They portray a married couple Oliver and Barbara Rose who have an adversarial relationship. The volatility in the marriage reaches insanity as the arguing couple literally destroy their house in vengeful acts toward each other. In the final battle they are hanging by a chandelier too weak to hold them. In the end, they fail to work together to save their marriage and it comes crashing to the floor.

Working together can save a marriage. Can adversaries become allies? The short answer is yes. Adversarial couples can become allies by making these 5 critical decisions.

Adversarial couples can become allies by making these 5 critical decisions.

A truce is an agreement between adversaries to stop fighting for a set period of time. To form an alliance you both have to agree to stop fighting. This means you agree to not talk about certain issues until you are ready. This is not an avoidance strategy. It is more of a delayed tactic in order to address the issues in a more civil manner. Achieving civility is your first task. This approach will also help you learn how to argue less and love more.

Women are more attuned to their emotions than men. They understand the need for emotional healing.

Guys want to forget about it and move forward. Guess what men? You are doing yourself and marriage a disservice by not taking time to deal with your emotions too. Underneath your anger and frustration are more primary feelings of sadness, fear, loneliness, and rejection. You need to learn how to deal with these feelings if you want to form an alliance with your spouse/partner.

Holding on to offenses hurts you more than anyone. Forgiveness heals.

In order to be effective, forgiveness has to be a mutual process. It includes the following elements:

I just finished reading the book, “Unbroken” depicting the life of WWII veteran Louie Zamperini who was a POW in Japan. One of the things that struck me was how he acted toward his captors once he was freed. Louie came to a place of forgiveness which enabled him to show respect and compassion toward his adversaries.

Respect and compassion has to be mutual.  It will not be effective in forming an alliance unless both individuals exhibit it toward each other.

During the recovery phase, respect and compassion will aid the healing process. Give it to each other. Acknowledge it when it is given. This will set the process in motion. I wrote a book on respect for couples: Bringing Respect Back: Communicating Without the Conflict.

Develop the traits of an Allied Couple

Allied couples argue less and love more. How do they do it? Read my last blog to see how (click here). Here is a review of the 5 traits of an allied couple.

Do you want to argue less and love more? If you’ve read this far, the answer is obvious. So what’s your next move? Is it time to request a truce?  If so, think about how you want to communicate it. Gather your thoughts. Put it on paper. Use the right tone. Take action. If you do nothing your relationship may eventually hang by a chandelier. Avoid the crash landing. Request a truce. This is your first step in learning how to argue less and love more. 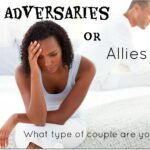 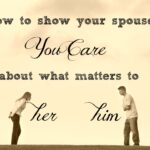